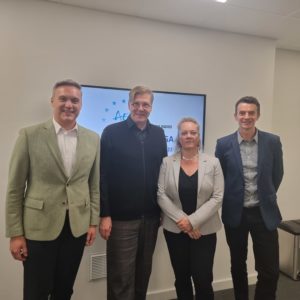 On 29 November 2022, the AER Extraordinary General Assembly appointed Marianne Bugge Zederkof, Director of DanskeMedier, Denmark – as the next Secretary General of the association.

Marianne Bugge Zederkof, outgoing AER Vice-President, takes over from Matt Payton (Radiocentre, UK) who has been recently become the CEO of Radiocentre.

As Secretary General, Marianne will help guide the AER advocacy for a thriving commercial radio sector and will continue the excellent work previously done by Matt in “leading the audio revolution” in Brussels. Marianne will work alongside President Stefan Möller and Director Francesca Fabbri on lobbying, policy and communications.

Marianne Bugge Zederkof said: “I am honored that the AER Executive Committee has asked me to take over as Secretary General from Matt Payton. Matt has done an exceptional job and I will build upon his work.

Radio is the most trusted medium and we have to build on that in a world where large tech platforms are the distributor, the ad vehicle, the gatekeeper hindering the business model in a non-transparent and dominating way.

AER is a strong and relevant organisation but we need to grow and expand in order to be able to keep fighting the necessary battles protecting freedom of speech, equal access to markets and radios place in a changing digital environment.

Many media organisations share the goals of AER and I think we need to work even closer with other organisations and trade bodies in order to protect our content, keep our voices heard and our work widespread in the European Parliament, the European Commission, and in the discussions about spectrum at global level.

He said: “Marianne knows AER and our mission inside out. Her expertise and personality will assure that AER continues the effective and successful work Matt has done”.

Matt Payton (Radiocentre, UK) was sincerely thanked by the AER Members for his exceptional contribution to the day-to-day lobbying and management of AER.

He said: “It has been a pleasure and a privilege to represent commercial radio at a European level over the past three years. I look forward to continuing to support the work of AER with Marianne as our new Secretary General”